I never purposely stopped blogging.  At least I don't think so.  I now think that it was likely the protective part of my psyche telling me to let things go and focus on me.

For a long time I fell into the same boat as a lot of bloggers.  I had a pattern, blogging connections, readers and comments.  I worried about how many readers I had and where I was getting my readers.  I had a list of things to talk about that were relevant to my blog.

But here's the thing, I started blogging for me.  And somewhere in all of that I lost me.  I wasn't speaking to myself, not was I speaking for myself.

I could update you with this massive post, but instead I'll say this.  I'm going to start blogging again.  For me, about me.  If it resonates with anyone else, great.  If I never have another reader, that's ok too.  The blog is returning to me.

Breast Cancer and Mastectomies Are Not Pink Ribbons

Here's the thing.  Cancer and mastectomies and reconstruction surgeries are scary.  I get that.  And when you talk to people about it, their first instinct is to comfort you and reassure you.  So somewhere along the way, people create these groups and agencies and networks to support women (and men) going through this.  They developed plans to help out, things to say to support and ways to help out.

But having DCIS, going through a mastectomy, reconstruction and subsequent surgeries, isn't a big pink ribbon.  It's not being glad that it's 'over'.  It's not getting on with life and being glad it wasn't cancer/glad I'm alive.  It's just not.  Not for me and not for a large group of people out there.

My scars are ugly.  They're never going to be pretty.  But they tell the story of who I am and what I've gone through.  The fact that I went through this emotional roller coaster and it wasn't cancer, isn't comforting.  It's just not.  It never will be.  I'm not over it and won't be over it for a long time, if ever.

I understand that people around me feel uncomfortable and they say and do things in the hopes of making me feel more comfortable and in turn them more comfortable.  But honestly, it makes me feel worse.  Like I should just sweep everything that I went through under the rug, don't talk about it and move on...pretend it never happened.

I had DCIS.
I had a 62% chance of breast cancer in my life.
I had a mastectomy.
I had reconstruction that resulted in big dark ugly scars.
I had a nipple & revision surgery.
I lost most of both of the revised nipples.
I'm not secure, safe because cancer is gone.
I deal with the repercussions of my choices daily.
I'm not comfortable in my skin currently.
I'm afraid to exercise.
I'm afraid to be happy.
I'm afraid to have the rug pulled out from under me again.
I'm...afraid.
Posted by Michelle at 12:00 PM No comments:

Firstly, I have decided that I am a documentary junkie.  If I lived a bit closer to the little theater in Minneapolis, I'd be there 3-4 nights a week to see every documentary they have.

Have you heard of the movie FED UP?  It's been on my radar since I heard about it about a month or so ago.  I've been waiting for it to play here so I could go see it.  Pete and I went last week and I wavered.  It seemed a bit counterproductive to eat popcorn while watching a movie like Fed Up.  So I brought some water and Pete got a soda.  But you'd be surprised how many people had popcorn and soda!

The movie touches on the lives of 3 kids who are obese and the struggles their families go through to try to regulate their weight.  In the middle, it give some horrifying facts about low fat, low sugar, sugar free and sugar.  I wish I had brought a headlamp, pad of paper and pen to take notes.  There was such good information.

The thing that struck me the most was that the sugar industry is mirroring the tobacco industry, almost to a T.  Tobacco denied issues with cigarettes for so long, in the public, in their internal paperwork and to congress when asked.  In the end, they were forced to admit that they knew for years how destructive it was.  The sugar industry is at the place of denial.  They deny how addictive sugar is, how bad it really is and just how much sugar is ok for humans.

I left with a renewed goal of kicking my sugar habit and be more observant of how much sugar I really eat.  Have you ever really looked at a food label?  Ever notice how sugar is the only listing that doesn't have a daily percentage behind it?  It's all because of the sugar industry and how much control they have at his time.  Did you know that adult women should limit their intake to 6 teaspoons a day?  Do you know how much is in a soda?  15.  Ever try finding a greek yogurt without sugar?  I spent an hour and 2 stores trying to find one that was healthy and had no sugar.  Sugar is pervasive and my struggle with it is real.
Posted by Michelle at 3:52 PM No comments:

Today And Only Today

Let me say that again.  Before, weighed more and ate horrible and although I wished I was healthier, I was okay to a certain point, living like that because I didn't know any better.  Now I know how awesome to feels to be in great shape.  I know how euphoric it can be to exercise hard and see results.  I know how much more energy I had when I ate better.  I know the difference.

But, it occurs to me that I am somewhat like an alcoholic, only with food.  I have lived so long with the habits that I developed as an unhealthy young adult and adult, that the easiest thing for me to do in times of stress, hurt, anger, upset...is to return to them.  It's familiar and easy and calming.

But I know better.  I know much better.  And when you know better, you should be doing better.

So today, and only today, I plan to:  choose to eat better, choose to move more, choose to destress when needed.  Tomorrow is another day and another chance to make good choices.  One day at a time.
Posted by Michelle at 12:05 PM 2 comments:

So where am I at?

After all that has gone on, where am I at?

Honestly...and I am going to be honest here...

I developed planter fascitis in my left foot.  So running...nope.  Walking...nope.  Some days, by the end of the day I can barely walk on it.  I'm trying to use the store bought inserts and being aware of my foot ware and doing the exercises I found on the net.  The gym has been non existent.

Eating.  Sigh.  I am full out sugar addicted again.  FULL OUT.  Pete has done so well with his weight loss and is hovering at 162-167 with a really fast metabolism.  He makes cookies about twice a week and keeps them on the counter.  I try not to indulge and honestly he would stop if I asked, but I don't want my stuff to impact him.  I try to have a green salad with lots of veggies and some protein in the form of hard boiled egg, cheese or tuna on it for lunch every day.  So that's on target.  But I'm not hungry for breakfast since I'm not at the gym and I struggle with what to eat.  Dinner I'm pretty good also.  It's the snacking.  Licorice, cookies, cake, PB cups...snacking.

I still have days where I question the choices I made.  There is a huge movement that says that doctors are 'pushing' mastectomies for people like me, when they're not really needed.  The instance of cancer deaths is down, but there is testing that shows that the type of pre-cancer that I had, doesn't often turn into full blown breast cancer.  The difference for me, is that I had the family history and the 60% chance of it actually going to cancer.  Sometimes it's hard to look past the what ifs and just be at peace with my decision.  The choices that I made had such an impact on so many aspects of my life and impacted Pete too.  And I need to stress that he is supportive of whatever choice I wanted to make, but that's not to say that there were some negatives that came with it.

I'm so freaking frustrated with myself!  My body image is bad again.  I don't want to shop for clothes, that's why I haven't bought very much bigger things.  Shopping isn't fun.  In fact, I've walked in several stores, only to walk back out again because I don't have the mental fortitude to dig in and start trying on clothes.  Not only have I gained weight, but my shape has changed again.  I realize how small my hips had gotten when I lost weight.  They're back to being big and it makes finding clothes really really hard (crying while writing this and thinking about it).

I've come to realize that what worked for me before in losing weight, isn't going to work now.  And I'm pissed off that I have to figure out a new plan.  Pissed.  But sitting here and bitching about the whole thing isn't going to change it, is it?  I need to figure out that plan.  Soon.
Posted by Michelle at 9:49 AM 2 comments: 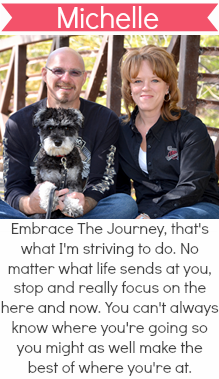 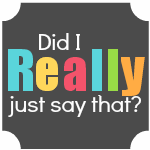 What I talk about...